The Imperial Citadel of Thang Long in Hanoi was built in the 11th century AD and is a UNESCO World Heritage site. It is from this citadel that the Chinese administrators and later the Vietnamese emperors ruled. It was also the headquarters of the North Vietnamese government and army during the American War from 1954 to 1975.

AusHeritage board member, David Huxtable and his company LookEar Design was engaged to design and develop a series of 14 interpretive signs for this magnificent heritage site, as part of a gift from the Australian Government. The content and text was developed by Professor Bill Logan from Deakin University, which described the history and significance of this important place. A selection of images, illustrations and maps were incorporated into the signage designs, along with the text in both Vietnamese and English.

LookEar Design’s Director, David Huxtable coordinated the design and manufacture of the long-lasting baked-enamel signs in Australia, which were the shipped to Hanoi and installed at set locations throughout heritage site.

The project was completed in 2016, with an official presentation by the Australian Ambassador to Vietnam, Hugh Borrowman. 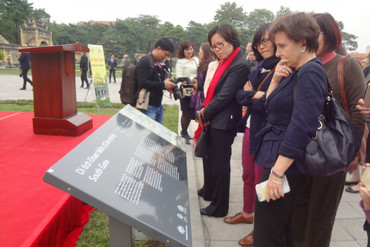