A blueprint is ready for conservation of the Kamaraj Memorial House in Virudhunagar, the place that shaped the formative phase of the leader’s long innings in public life.

Prepared under the auspices of Australia’s cultural and heritage organisation, AusHeritage, over a period of nine months, the blueprint — Conservation Management Plan (CMP) — has several recommendations aimed at enabling restoration of the historic building to the period when Kamaraj lived there — the early 20 century. 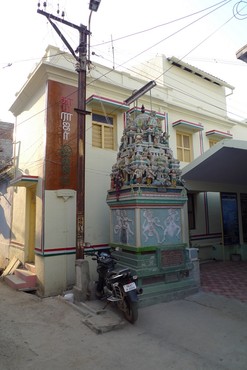 The project of CMP preparation was supported by the Australian Government’s Department of Foreign Affairs and Trade through the Australian International Cultural Council and the office of the Virudhunagar Member of Parliament Manick Tagore. In late June, Australian Consul General for South India David Holly addressed a letter to Chief Minister Jayalalithaa, enclosing a copy of the CMP.

Just as the Virudhunagar house, the other memorial house of Kamaraj in T. Nagar, Chennai, where he died, is maintained by the State government.

Giving brief accounts of the town in the southern Tamil Nadu, the biographical sketch of the leader and the social profile of the Nadar community [to which Kamaraj belonged], the CMP, running into about 80 pages, provides insight into physical and architectural features of the house along with maps, photographs and drawings.

The recommended conservation works would enhance the ability to interpret the significance of the building. As for the exterior of the structure, the advice is to reinstate a domestic appearance to it.
Suggesting that the interior be brought back as close as possible to the time when the house was occupied by Kamaraj, the document acknowledges practical difficulties in doing so in certain aspects. Controlled internal environment should be provided at least to one portion of the building that can accommodate perishable and fragile items kept in the house.
Objects
Chairman of AusHeritage Vinod Daniel, who was born in Virudhunagar and personally managed the CMP project, feels there is a need for rearranging objects kept at the Virudhunagar Memorial House. There is no point in crowding the Virudhunagar house with objects relating to the later part of the leader’s life. The suitable place for keeping those objects is the Chennai house.

Calling for the development of a clear curatorial programme for the Virudhunagar house, the CMP suggests that displays be developed on certain themes of Kamaraj’s early life such as school years and relationship with the Nadar community. They could include a mixture of visual and audio materials, containing podcasts of interviews with family members.

Recalling intensely how interviews were held with some relatives and friends of the leader for the CMP project, Mr. Daniel, who is on a visit to Chennai, said such accounts are extremely significant. The document recommends that qualified historians, having experience in taking oral histories conduct detailed interviews, the transcripts of which should be made available in Tamil and English at the site.

A dedicated web page should be created for the memorial, the CMP says, suggesting the idea of preparing a short video film on Kamaraj’s life, especially the Virudhunagar years. Even though the house is relatively small, there are opportunities to develop areas for more displays and creating a reading room or library. The CMP, in its final part, states that appropriately-skilled professionals should undertake regular inspection of the building fabric and the collections.

Mr. Daniel expresses the hope that the State will implement the findings of the report.

The article can be found at:

The Next 50 Years: Challenges and Opportunities for World Heritage