AusHeritage, Australia’s international cultural heritage network and Visva-Bharati University will have a joint forum in Santiniketan on March 15-16, 2011 to develop a functional brief for identifying critical aspects of a proposed museum for Rabindranath Tagore. The new museum will store and display current collections from Rabindra Bhavan (located within the Visva Bharati University), including manuscripts, paintings, furniture, textiles and musical instruments. 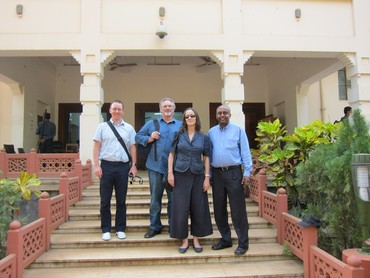 “The forum will explore key aspects for a world class Tagore Museum and the resulting brief can form the basis for the Architect and others designing the new museum,” said Mr Vinod Daniel, Chairman of AusHeritage. He added that he has been to Santiniketan twice and the strong emotional connection between the visitors and the museum is very apparent. Any new museum should assist with strengthening and capturing this.

“The Australia’s High Commissioner to India, Peter Varghese, said “this museum which is soon to be part of a world heritage precinct, will be an important link to Tagore and his central role in Indian history and culture. I am delighted that Australia is able to contribute to this important project.”

Through support from the Australia-India Council (AIC), AusHeritage members have worked on many projects in India including providing assistance for designing an international exhibition gallery for the Chatrapati Shivaji Maharaj Vastu Sangrahalaya in Mumbai, developing a charter for conservation of buildings for the Indian National Trust for Art and Culture, Capacity building for Museums in Assam, Kerala, West Bengal and Delhi and several other preservation initiatives. In 2000, thirty three cultural artefacts from Erode were repatriated from Australia to the Government Museum in Chennai. AusHeritage has memorandum of understandings with INTACH and the Madras Christian College.

The AIC was established in 1992 to broaden the relationship between Australia and India by encouraging and supporting people-to-people links and increasing levels of knowledge and understanding between both countries.
AusHeritage (www.ausheritage.org.au) is Australia’s international network for cultural heritage. The organisation’s members include Australian universities, national collecting institutions, State galleries, libraries and museums, private architectural firms and private and government conservation services. For further information please contact Vinod Daniel, Chair, AusHeritage on 91 9840237322.

Extract from Wikipedia
Rabindranath Tagore, 1861-1941, was a Bangali poet, novelist, musician, painter and playwright who reshaped Bengali literature and music. As author of ‘Gitanjali’ and its “profoundly sensitive, fresh and beautiful verse”. He was the first non-European who was awarded the Nobel prize for Literature in 1913. His poetry in translation was viewed as spiritual, and theis together with his mesmerizing persona gave him a prophet-like aura in the west. His “elegant prose and magical poetry” still remain largely unknown outside the confines of Bengal.

The following articles were published in various Indian newspapers covering the forum:

A contemporary guide to cultural mapping- An ASEAN-Australia perspective – 6 May, 2013