Key activities during the week include a workshop for Museums in West Bengal and North East India at Victoria Memorial Museum, a forum & workshop on the adaptive reuse of historic buildings with Indian National Trust for Art and Cultural Heritage (Kolkata), evening public lectures on heritage conservation at Loreto College and visits to a number of heritage buildings. Four Australian heritage experts and a large number of Indian heritage professionals will be involved. 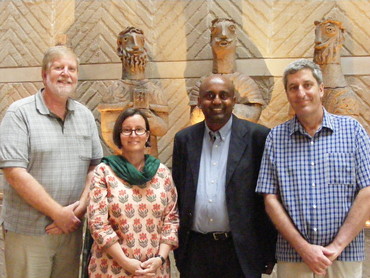 “Heritage is a very important aspect of society and I am very supportive of this close collaboration between Australia and India in this area. Professionals from AusHeritage, Australia’s international network for heritage services continue to work closely with Indian institutions on several projects, including workshops and training sessions” said Mr Peter Varghese, High Commissioner of Australia.

“Though Australian and Indian heritage practitioners have completed a number of projects over the last decade, this is the first joint heritage activity in Kolkata” said Mr Vinod Daniel, Chair of AusHeritage. He added that he was delighted that AusHeritage could work with three leading Indian institutions as part of the Australia India Heritage week i.e. Victoria Memorial Museum, INTACH and Loretto College in Kolkata, a city with its rich tangible and intangible heritage.

AusHeritage has also provided support for developing a new exhibition gallery at the Chhatrapati Shivaji (Prince of Wales) Museum in Mumbai in addition to working closely with several private and government Indian cultural heritage organizations including their recent October 2009 workshop for Museums in Kerala in collaboration with the Kerala Centre for Heritage Studies. It has a memorandum of understanding on cultural heritage collaboration with the Indian National Trust for Art and Cultural Heritage (INTACH).

Mr. G. M. Kapur, INTACH Convenor for Kolkata said that he was delighted with INTACH’s close working relationship with AusHeritage and that this adaptive reuse of historic buildings forum is a prime area of interest for Kolkata. The Honourable Finance Minister for India Mr. Pranab Mukherjee conveyed his best wishes for the success of the Australia India Heritage week.