On August 4, Southeast Asian Art and Culture was launched in the ACT Legislative Assembly Building in Canberra. The event was attended by representatives from the ten ASEAN diplomatic missions in Canberra as well as from the Department of Foreign Affairs and Trade, the ACT Government and AusHeritage Ltd. Various Canberra based diplomats, scholars and people with connections to ASEAN were at the opening. 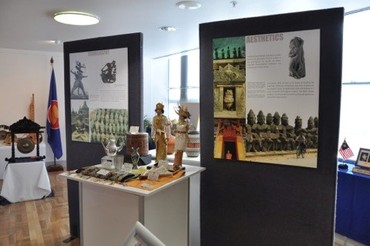 Part of the Southeast Asian Art and Culture exhibition

The exhibition consisted of a series of panels outlining aspects of ASEAN art and culture supported by a selection of artefacts from each of the ASEAN embassies and high commissions. 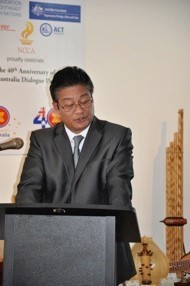 The Ambassador for Myanmar H.E. Min Thein during his opening speech

The Ambassador of Myanmar opened proceedings with welcoming remarks, focusing his comments on the importance of art and culture in supporting ASEAN unity and community building. He also spoke of the importance of cultural mapping as a valuable agent for documenting and promoting the rich and diverse cultural fabric of Southeast Asia. 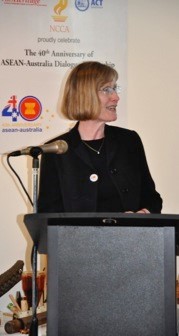 Mary Porter, Deputy Speaker of the ACT Legislative Assembly responded to the Myanmar Ambassador’s speech indicating the Assembly’s pleasure in making the exhibition space available for the event. Deputy Secretary, Gillian Bird from the Department of Foreign Affairs and Trade spoke next, emphasizing the importance of Australia’s long standing relationship with ASEAN, Australia becoming ASEAN’s first dialogue partner in 1974. Ms. Bird reiterated the significant role of ASEAN in the region and the importance of the relationship to Australia. She reported that later in the year Australia’s Prime Minister, Tony Abbot and Julie Bishop, Minister for Foreign Affairs and Trade, will participate in an ASEAN-Australia heads of government meeting which will become an annual event from the 2014. Ms Bird commented that this commitment will further strengthen ties at the highest level between Australia and ASEAN. 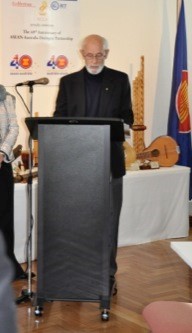 In his speech Ken Taylor spoke about the meaning of everyday culture and its diversity in Southeast Asia. He also commented briefly on the development of the guidebook A Contemporary guide to cultural mapping – an ASEAN-Australia perspective and its value as a tool for exploring and promoting cultural diversity. Dr. Galloway provided some insights on the preparation of the exhibition and how it had come together so nicely with such a rich array of artefacts from ASEAN Embassies and High Commissions. 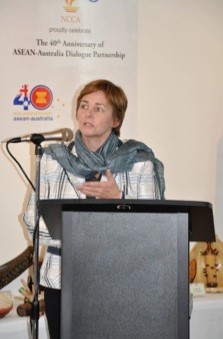 Dr. Charlotte Galloway, Centre for Art History and Art Theory, The Australian National University during presentations at the opening of Southeast Asian Art and Culture

The exhibition was developed essentially from the book Southeast Asian Art and Culture, Ideas, Forms and Societies published by the ASEAN Committee and Culture and Information in 2005. All but three of the panels in the exhibition relate to various chapters in the book, the text written by Dr. Aurora Roxas-Lim and George Tapan was responsible for much of the photography. Both the author and photographer are from the Philippines. 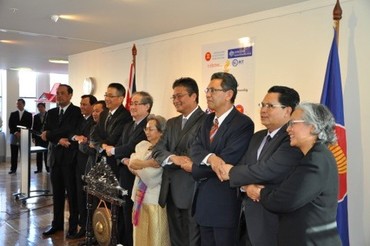 The ASEAN Ambassadors & High Commissioners group photo after the speeches

The three remaining panels were based on key concepts from A Contemporary Guide to Cultural Mapping – An ASEAN-Australia perspective published by the ASEAN Secretariat, Jakarta in association with AusHeritage Ltd in 2013. This is best summarized by a short quote from the text from the panel Cultural Mapping, Not So Ordinary People.

There is now worldwide interest in everyday culture – it is through the ways we live and do things that we come to value and understand the space around us. We appreciate that every culture and community has its own understanding of place, and each has different meaning and importance. Nowhere is this more obvious than in ASEAN countries and Australia including its Aboriginal culture, where outstanding examples of the continuous living traditions of history are part of a complex and beautiful tapestry of everyday life. 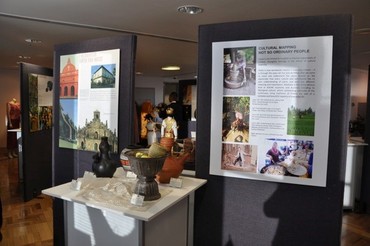 One of the three cultural mapping panels (right) specially prepared for the exhibition.

The Myanmar Ambassador reflected on the potential role of cultural mapping in the pursuit of community building across ASEAN in his opening remarks and the three cultural mapping panels segued nicely with the specific thematic material in the panels developed from Art and Culture including those such as symbolism, myths and traditions, iconography, aesthetics, Hinduism and Buddhism and encounters with the west as examples.

Southeast Asian Art and Culture was open for only a week which is a great shame considering the quality of the material in the show, especially the panels. It would be hoped that it could be revamped at some stage to travel around Australia because it not only promotes a broader appreciation of Australia’s neighbours in Southeast Asia but an understanding of the richness and cultural diversity of the region. 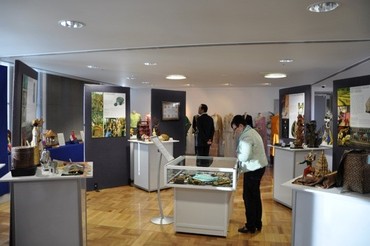 AusHeritage greatly appreciates the support of the ACT Government, the Department of Foreign Affairs and Trade, ASEAN, the NCCA and especially H.E. Belen F. Anota, Ambassador, Embassy of the Republic of the Philippines and her staff, Nina Padilla Cainglet, Minister and Consul General, Dulce D. Checa, Eleanor Regalado and Jim San Agustin for their innovation, enthusiastic support, encouragement and facilitation of AusHeritage’s participation in this 40th Anniversary celebration of Australia’s relationship with ASEAN.

A New Home for Old Artefacts