AusHeritage, in association with Bruce Pettman and Mary Knaggs from the NSW Government Architect’s Office, is currently undertaking a consultancy project to restore and enhance the buildings and facilities at the Kapitan Keling Mosque in George Town, Penang Island, Malaysia. 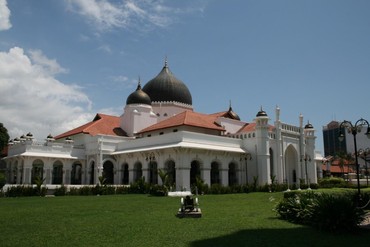 Main entry and facades of the Kapitan Keling mosque

The Kapitan Keling Mosque is acknowledged as a nationally significant cultural heritage building and site which contributes substantially to both the built heritage and the living cultural values of this World Heritage town inscribed by UNESCO in 2008.

An interior view of the prayer space

Built in several stages from 1802 to the 1920’s the mosque building, and surrounding waqf properties, has enriched and contributed much to the religious, social and commercial diversity and continuity of the historic core of George Town. 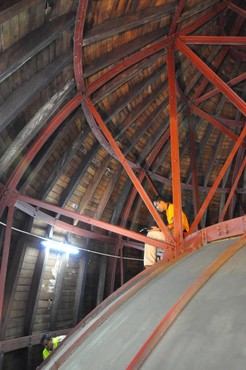 Following the initial heritage study and condition survey by AusHeritage members led by Bruce in 1996, and which was partly funded by AusHeritage, considerable work has been done since 2000 on repair and restoration works to the complex.

However the current project relates to assessing the condition and performance of the principal weather protection elements of the mosque, namely the large copper dome and the terracotta tile roof areas. It involves the specification and implementation of repair works to these elements over the next 8-10 months. In addition the commission includes preparation of an ongoing maintenance program template for the mosque as well as developing sensitive concept designs for improved facilities and landscaping within the building and the site for the benefit of the mosque community and other stakeholders.

The consultancy is being implemented in close collaboration with the Penang architectural firm Arkitek Urbanisma and with local researcher Dr Gwynn Jenkins. The team was commissioned by the Think City organisation, an initiative of the Malaysian Government, to support and encourage innovative projects within the World Heritage conservation parameters of George Town.