AusHeritage has received a grant from the Australia International Cultural Council to prepare a conservation management plan and provide assistance in museology aspects for the historic house museum of veteran congress leader Mr K. Kamaraj in Virudhunagar, Southern India. AusHeritage Deputy Chairman Roger Beeston and Anthony Hemingway (RBA Architects Pty Ltd) and AusHeritage Chairman Vinod Daniel (IndHeritage Pty Ltd) will be involved with this project. It is envisaged that the completed CMP will be presented during the Australian Promotion in India year 2012.

This house, probably constructed during the 19th century, is located in the old part of town with narrow winding streets. It was the birthplace of Kumarasami Kamaraj (1903-75), an important politician in post-Partition India. He was known as the ‘Kingmaker’ as he was instrumental in bringing two prime ministers to power, Indira Ghandi and Lal Bahadur Shastri. The significance of his name, especially in Tamil Nadu, is indicated by the fact that the Airport in Chennai is named after him 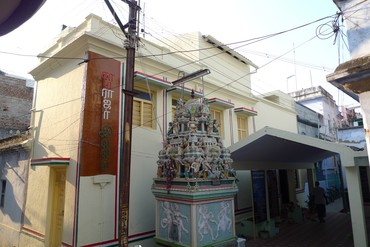 The family continued to live in the house until Kamaraj’s death in 1975, when it was acquired by the government. Subsequently the house was heavily modified – the exterior was stripped of much of its original detailing and a permanent roof top level replaced a lightweight structure. Internally the museum has developed in an ad hoc manner and there is a growing acknowledgement that the site needs a radical makeover in order to provide a more meaningful experience, however there currently is no clear direction on how this could be achieved.

At the invitation of the federal member of the Indian parliament from that constituency, Mr Manickam Tagore, members of AusHeritage, along with the Australian Consul General Mr David Holly, made a preliminary visit to the site in March 2011 and met with local officials and parliamentarians and a lot of enthusiasm was developed for the project (please see attached press coverage).

The aim of the CMP would be to provide guidance on how to sustainably conserve and better present the building so that its significance could be more readily understood and also improve the internal presentation of objects and displays, etc.

The CMP would be prepared in accordance with the internationally renowned Australia ICOMOS Burra Charter for Places of Cultural Significance. Australian expertise in preparing CMPs and the Burra Charter are both well known and highly regarded in India.