AusHeritage, Australia’s international cultural heritage network and Madras Christian College (MCC) signed a memorandum of understanding today in the premises of MCC in Chennai, India. The memorandum will assist in furthering cooperation on cultural heritage preservation educational initiatives between the two organizations over the next five years. Specific activities planned for 2011 include residential museum internship, program for cultural conservation students and targeted lectures on heritage preservation.

“India’s rich cultural heritage is a very valuable asset both in terms of recognizing India’s journey to become the world’s largest democracy as well as being a sector that is currently one of India’s largest employers,” said Mr Vinod Daniel, Chairman of AusHeritage. He added that India is currently at a critical point where development and preservation need to go hand in hand and skills shortage in critical aspects of heritage preservation need to be tackled. 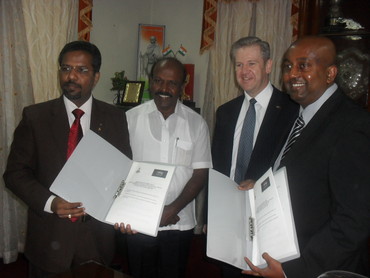 Dr R. W. Alexander Jesudasan, Principal of Madras Christian College said that this agreement will greatly assist the college in developing its historic museum and archives as well as be a catalyst for delivering broader cultural heritage educational initiatives. Considering the historicity of the college and the country’s recognized museum housed in the Zoology Department in addition to the college archives which is a treasure house for those working on such material, the current initiative will be a boon to the institution, he added.

“AusHeritage has worked extensively in many heritage preservation projects in India, and this linkage with the Madras Christian College will ensure a strong focus on projects in Tamil Nadu,” said Mr David Holly, Australian Consul-General for South India, who witnessed the signing of the memorandum of understanding.

Through support from the Australia India Council, AusHeritage members have worked on many projects in India including providing assistance for designing an international exhibition gallery for the Chatrapati Shivaji Maharaj Vastu Sangrahalaya in Mumbai, developing a charter for conservation of buildings for the Indian National Trust for Art and Culture, Capacity building for Museums in Assam, Kerala, West Bengal and Delhi and several other preservation initiatives. In 2000, thirty three cultural artefacts from Erode were repatriated from Australia to the Government Museum in Chennai.