AusHeritage and the Bureau of Cultural Heritage, Ministry of Culture Taiwan, signed a memorandum of understanding (MoU) to further their cooperative relationships in the fields of cultural heritage preservation and the promotion of potential world heritage sites in Taiwan.

The MoU was signed in Taipei on March 30, 2015 by the Director, Bureau of Cultural Heritage Mr Gwo Long-Shy and AusHeritage Chair Mr Vinod Daniel. The Minister of Culture for Taiwan Mr Hung Meng-Chi, Acting Representative for the Australian Office Mr Richard Neumann, President of the China University of Technology Mr Ku Chia Hung, Mr Bruce Pettman from AusHeritage and Professor Alex Yen from China University of Technology witnessed the signing. 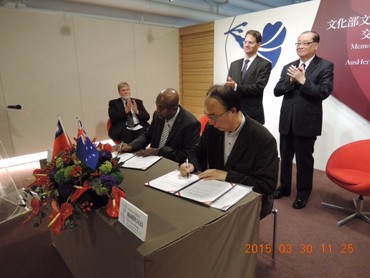 AusHeritage Chair Mr Vinod Daniel said he was “delighted that Australian heritage practitioners would collaborate with Taiwan colleagues in the preservation of Taiwan’s cultural heritage”. He added that AusHeritage had been working closely with Taiwan for over two decades and this MoU is a formalisation of the long standing partnership. He acknowledged that the China University of Technology had been an anchor for many of the projects and Australian senior heritage practitioner Mr Bruce Pettman has been working closely with Taiwan for over twenty years. 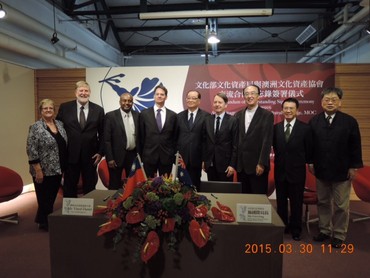 After the signing of the MoU

Mr Richard Neumann, Acting Representative Australian Office said that “initiatives such as this further strengthen the growing relationship between Australia and Taiwan”.

Mr Gwo Long Shy, Director of the Bureau of Cultural Heritage said he was delighted with AusHeritage’s work with the China University of Technology in Kinmen Island and he was keen for exploring collaboration to preserve the “Shuei-Jin-Jiou Mining Sites”. He added that an action plan was currently being developed for further collaborations.

During the two decades that AusHeritage experts have worked in Taiwan, some of the projects include Kinmen Island, DiHua Street Revitalisation and Pao An Temple. AusHeritage has an MOU with China University of Technology and practitioners from Australia have been involved with several seminars and workshops both with built heritage as well as moveable heritage.

After the signing of the MoU, Mr Bruce Pettman presented a talk on “World heritage management – Sydney opera house as an example” and Mr Vinod Daniel gave a talk on “Museums becoming more relevant to world heritage in a global environment”.

Steward of heritage places: Spotlight on architect Bruce Pettman and his passion for conservation