The following is an excerpt from The Hindu News, Chennai, written by K. Lakshmi and published 24 January 2019.

Visiting delegation hopes to collaborate on projects and share expertise

The Public Works Department is likely to enter into a memorandum of understanding with the Australian government soon to share knowledge on conservation of heritage buildings.

The department had agreed upon the suggestion made by a delegation of Australian heritage experts led by AusHeritage, a network of cultural heritage management organisations established by the Australian government.

The seven-member delegation visited the PWD complex on Wednesday for a meeting with Building Centre and Conservation Division (BCCD), PWD, and a heritage walk around the Chepauk Palace on the sidelines of Tamil Nadu Global Investors’ Meet. 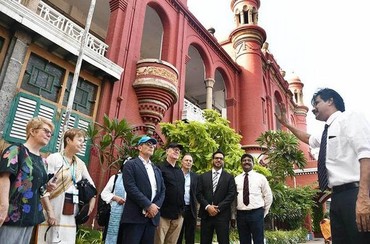 An Australian team of heritage experts at the PWD complex in Chepauk on Wednesday. Photo Credit: R. Ragu

Vinod Daniel, chairman, AusHeritage, told The Hindu: “We have already collaborated with the Tamil Nadu government to restore Kamaraj Memorial House in Virudhunagar. We also closely work with the Government Museum here. This meeting will open doors to more such collaborative projects and sharing of expertise on approach to conserve colonial structures.”

“We are on a mission to India for exchange of knowledge between heritage practitioners in various cities. We have also discussed with Minister for Official Language and Tamil Culture K. Pandiarajan to hold capacity building workshops on conservation of heritage and museum collections,” he said.

Roger Beeston, deputy chairman, AusHeritage, said “Chennai still has skilled persons to pass on traditional building techniques. In Australia, we depend on material scientists to research on material used in heritage structures.”