Roger Beeston, deputy chair of AusHeritage, recently attended a workshop at Jadavpur University for the restoration of the 230-year-old Writers’ Buildings, the permanent seat of the West Bengal government in India.

Mr Beeston is being consulted on the conservation works and has made many recommendations including adoption of his ‘Heritage Management: The Sixteen Steps – The Art of Achieving a Balanced Heritage Conservation Outcome.’ Included in this is the key recommendation to commission a dedicated Conservation Management Plan.

After a recent initial inspection exploring the removal of multiple layers of paint and cement, Mr Beeston also suggested to restore the natural red brickwork from the Victorian era (1837 to 1901). “What struck me on seeing it the first time was the red paint. There are four key phases in the building’s evolution. The most recent phase, the Victorian phase was meant to be red brick,” Mr Beeston said. 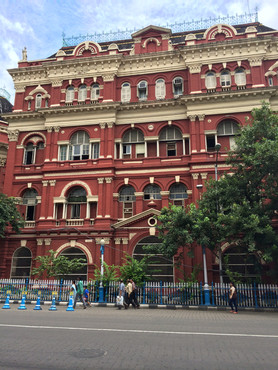 Other suggestions made by Mr Beeston include reinstalling slate to the Mansard roofs and preserving the colourful and patterned Victorian era Minton floor tiles, while allowing the introduction of smart and modern services such as sensors, air-conditioning, water sprinklers and modern conveniences. “It should engage the public through its architectural finesse and smart features,” said Mr Beeston. 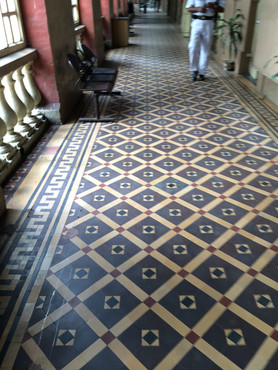 Thomas Lyon designed the neo-classical building c1780, for Richard Barwell, a council member of the day. The building was privately owned until 1854 when it was bought by the East India Company to house junior employees or ‘writers.’

Chief Minister Mamata Banerjee, had the idea for the restoration as part of re-establishing the grandeur of colonial buildings to the eastern metropolis. Madhumita Roy, head of the Jadavpur University’s Department of Architecture, is leading the project, with expert input from the Indian National Trust for Art and Cultural Heritage (INTACH).

The restoration project could include demolishing post-Independence era structures which restrict internal spaces and have reduced ventilation. Energy- efficient conservation technologies are likely to be employed to incorporate passive architectural interventions for a sustainable and functional green building.