The project to restore the heritage significant Maryborough Railway Station (Victoria) has been recognised with the Award of Merit in the 2013 UNESCO Asia-Pacific Awards for Cultural Heritage Conservation. The Heritage Architects for the project are RBA Architects + Conservation Consultants, directed by AusHeritage vice-chairperson Roger Beeston.

“We were particularly encouraged to see our broadest ever geographical range this year, spanning from the Cook Islands in the Eastern Pacific Ocean to the Islamic Republic of Iran at the far end of West Asia”, comments Tim Curtis, Chair of the Jury and Chief of the Culture Unit, UNESCO Bangkok.

The Jury for the awards, consisting of eight international conservation experts, highly commended RBA’s achievements and made the following comments:

“The conservation of Maryborough Railway Station has breathed new life to a fine and rare example of a Victorian-era station built in the Anglo-Dutch style. The distinctive red brick building had suffered from long-term neglect and earlier inappropriate repair works that masked its cultural value and detracted from its operational function. Through meticulous research and conservation interventions, the character and values of the place have been retained and the continuing function of the station has been enhanced. Undertaken as part of a broader urban revitalization scheme, the project has also uplifted the local community. Vic Track’s decision to conserve the station is exemplary as a model to encourage further conservation of Australia’s railway and industrial heritage.” 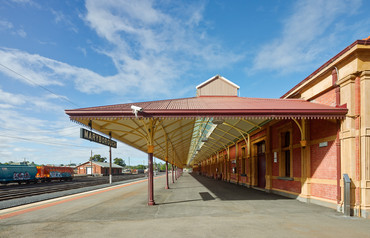 In 1895 the Maryborough Station in central Victoria, was described by the (clearly astonished) visiting American author, Mark Twain, as ‘A railway station with a town attached’. Maryborough Railway Station is one of the most significant railway heritage assets in Australia and the conservation works have recaptured the former grandeur of the station. The Maryborough Station was restored in three stages over 10 years, starting with the production of a CMP by RBA.

A materials scientist, heritage structural engineer and glass and ceramics conservators were pivotal in resolving and implementing these works. A conscious effort was made to minimise the introduction of new building fabric and faithfully reconstruct original details in accordance with the Australia ICOMOS Burra Charter 1999 principles of conservation.

The UNESCO Asia-Pacific Awards for Cultural Heritage Conservation programme recognizes the efforts of private individuals and organizations that have successfully restored and conserved structures and buildings of heritage value in the region. By recognizing private efforts to restore and adapt historic properties the awards aim to encourage other property owners to undertake conservation projects within their communities, either independently or by seeking public-private partnerships.

The winners were selected based on how the projects reflected a clear understanding and application of various criteria, such as the articulation of the spirit of place, technical achievement, appropriate use or adaption, and the project’s contribution to the surrounding environment and the local community’s cultural and historical continuity.